The Investor's Advocate: Disruption for The Disruptors? 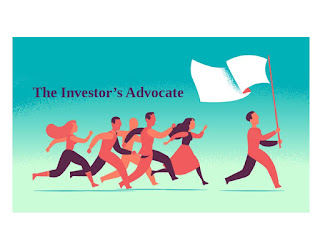 How to Own Stocks That Compete With Disruptors

Can companies successfully compete against the so-called Disruptors? And if so, how can you, as an investor, benefit from their success? These questions are explored in a posting called "Forced Feeding" (http://www.howtoinvestblog.net/2018/02/forced-feeding.html), on the owner of wealth management firm The Planning Perspective ( www.theplanningperspective.com ) Anthony Rhodes' How To Invest blog (www.howtoinvestblog.net).

"It's very difficult to compete with Disruptors, because paradoxically, you are actually competing against a better version of yourself. "Mr. Rhodes began. "These companies are masters at exploiting business inefficiencies." he added. "The interesting thing about Disruptors is that they don't generally create anything new, but instead use technology and other means to exploit the inefficiencies that already exist within other businesses." he explained. "In essence, their competitors inability to remove the barriers which provide a better experience for their customers is what allows Disruptors to subsist in the first place." he continued.

The term "Disruptor" is used to identify companies whose business model allows them to disrupt or alter the way other businesses operate. It's generally associated with gargantuan companies like Amazon, Netflix or Google.

So, should companies simply lower their profit margins to the bare minimum in order to stave off Disruptors from entering their field of business? Not exactly, says Mr. Rhodes

"There are some measures that companies can implement to help them to better compete with Disruptors, for the benefit of themselves and their shareholders." he stated. "I address them at length throughout the post, but needless to say, it involves confronting the truth about their situation, and taking steps to prevent future Disruptors from ever existing." he closed.

(Copyrighted material. Do not reproduce without permission.)

Popular posts from this blog

July 30, 2021
A Glitch in Nature's Matrix Provides Golden Opportunities for Investors, and Everyone Else Is there a flaw written within the very coding of nature which makes it susceptible to exploitation? And if so, how can it be utilized to increase the performance of your investments? To find the answers, you should read a posting called "Rewarding Repetitions"  ( https://www.howtoinvestblog.net/2021/07/rewarding-repititions.html ) by Anthony Rhodes. It's a recent addition to his popular How To Invest blog ( www.howtoinvestblog.net ). Mr. Rhodes is the owner of wealth management firm The Planning Perspective ( www.theplanningperspective.com ). "In this particular case, Mother Nature may actually be a victim of her own success." he began. "Once nature discovers a method which proves to be successful, she, like all of her offspring, seeks to replicate it, and these replications can produce certain opportunities." he added. " But these opportunities onl
Post a Comment
Read more

The Investor's Advocate: Spring Into Action

March 30, 2021
Using Warming Temperatures as Reminder to Remove Glacial Under Performers Within Your Portfolio Are you performing an analysis of your portfolio on a quarterly basis? And if not, why? This very important action could literally be the difference between its success or failure, so says Anthony Rhodes, the owner of wealth management firm The Planning Perspective ( www.theplanningperspective.com ), in a posting on his popular How To Invest blog  ( www.howtoinvestblog.net ) called "Is Your Portfolio in Need of Some Spring Cleaning, Too?"  ( https://www.howtoinvestblog.net/2016/11/is-your-portfolio-in-need-of-some.html ). "Like other facets of our lives, our investments should also be evaluated at least quarterly." he began. "In order to identify successes, and eliminate failures, such adjustments are essential, otherwise we run the risk of having perpetual under performers in our portfolios for extended amounts of time, which could actually prove disastrous."
Post a Comment
Read more

December 31, 2021
A Stubborn Pandemic, Rising Inflation and Customary First Quarter Conditions Makes This Winter Season Unwelcoming to Say The Least...and Opportunistic   With both Omicron variant cases and prices for just about everything else on the upswing, are you looking forward to a winter comprised of burrowing yourself and family in the home until safer, less inflationary conditions eventually arise? Well, what if I told you that this environment may actually be ideal for a particular type of growth that will get you out of the house and mingling throughout the entire winter, and assisting in the growth of your portfolio while doing so? Would you be interested in learning more about it? If so, you should definitely read an essay entitled "A Financial Cure for The Post Holiday Blues" ( https://www.howtoinvestblog.net/2016/11/a-financial-cure-for-post-holiday-blues.html ). It's a post within Anthony Rhodes' popular How To Invest blog( www.howtoinvestblog.net ). Mr. Rhodes is t
Post a Comment
Read more